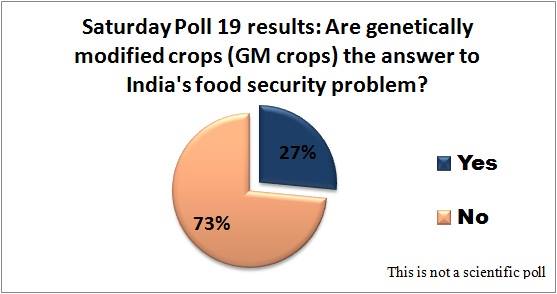 A genetically modified crop is a new variety of crop developed by artificially inserting genes with desirable traits from one organism in to another, thus creating a plant with more number of desirable traits than available in nature. The suitability of such crops for human consumption has been a contentious issue for many years now in India.

The strong differences between the proponents and opponents of GM crops revolve around the probable risks that these crops bring along- harmful side-effects, a trend towards a single variety of crops (monoculture) and contamination of other crops. The opponents believe these fears are realistic while the proponents point out that none of these probable side effects have been scientifically demonstrated to have occurred. Unfortunately however, the common people have not had the opportunity to fully appreciate the nitty gritties of the argument presented by the two sides. So many experts feel that public opinion on this matter developed in an information vacuum that just highlighted the fears.

As of today, 28 countries of the world have approved one or more genetically modified crops.

Evidence from other countries suggests that GM crops have addressed the problems of food scarcity and nutritional needs to a great extent. As of today, 28 countries of the world have approved one or more genetically modified crops. In the US, a major proportion of the soybeans, corn, rice and cotton is genetically modified. In fact, these crops provide many advantages over the conventional crops. For instance, scientists have suggested that golden rice (a genetically modified rice) can be an effective method of alleviating vitamin A deficiency. It is currently produced in Philippines to reduce malnutrition.

In India, however, we seem to have had a bad start that deprived us of meaningful and informed public debate, and evidence based policy decision making on this matter. In 2002, cotton became the first genetically engineered crop that India approved. There were attempts to introduce Bt brinjal but that never happened, thanks to a controversy that its predecessor cotton had kicked up. No other genetically modified crop has been produced in or imported to our country till date.

The controversy over GM crops in India can be associated with farmer suicides for which some people blamed Bt cotton. They believed that Bt cotton farmers bought the expensive seeds of the crop in the hope of a bumper harvest but that did not happen and those farmers committed suicide under the burden of debt. But that opinion has since changed in the face of new evidence to the contrary.

In 2008, the International Food Policy Research Institute conducted a study and concluded that the suicides were, inter alia, a result of certain institutional, climatic, and economic factors.

In 2008, the International Food Policy Research Institute conducted a study and concluded that the suicides were, inter alia, a result of certain institutional, climatic, and economic factors. An example of such a factor is that even after 66 years of being an independent country, 70% of India’s farmland depended on monsoon. So when monsoon fails, crops fail as the government has still not planned or implemented an effective irrigation system. The crop in question, Bt cotton itself, was said to have increased cotton yield and decreased pesticide use by 40%. Thus, the policy decision to ban GM crops is increasingly been seen as not a well thought out decision.

The proponents warn that since food scarcity is an enormous problem in India, there will be a huge humanitarian price to pay if we want to allow unsubstantiated fears to dictate our choice of solutions to our basic problems. Considering that in the last two years (2011 to 2013) alone, 21.38 crore people of India were suffering from chronic hunger, that warning definitely needs heeding.

The poll referred to in the first paragraph is our Saturday Poll 19 that was posted on our social media on 1st March, 2014.