For more than twenty years, Deepalaya, an NGO based in Delhi, has been successfully running a school in the slums of Sanjay Colony in Okhla, New Delhi. Known to the residents of Sanjay Colony simply as ‘Deepalaya’, the school has been synonymous with opportunity and success. Functioning from its present premises since 1992, the school is one of the best low cost private schools in the city. Thousands of poor students living in the slums have graduated from Deepalaya. The school has been instrumental in transforming the lives of poor children through quality education for a small fee, an education that was otherwise beyond their reach. Some students of Deepalaya were even given scholarships to study in the US, and have returned with a mission to transform the lives of other poor children.

Unfortunately, the government of Delhi is shutting down Deepalaya School, Sanjay Colony. A stark testimony to the mindless regulations under RTE and the Delhi School Education Act, this school has been shut down because it is not a ‘recognized’ school. Even though Deepalaya boasts of excellent facilities and an enviable track record, the Delhi government refuses to recognize the school because under the Delhi School Education Act of 1973 (DSEA) every school has to own the land it is run on, and Deepalaya School stands on land leased from the Slum Board. And according to Section 18 of the Right to Education Act of 2009 (RTE) ‘unrecognized’ schools are illegal. The school is now functioning as a learning centre as requested by parents in the colony. The nearest government school is in a very poor condition.

RTE was enacted to give free and compulsory education to every child in India. But RTE has been more effective in shutting down several low cost private schools like Deepalaya, thereby depriving poor children of quality education and locking them up in their poverty trap. A law which set out to educate every poor child in the country has been ended up snatching-away education, albeit unintentionally, from the few who had affordable access to it.

Deepalaya School is not alone. There are thousands of schools across India, and millions of children enrolled in them, facing the brunt of ill-considered, counter-productive regulations under the RTE and other State government laws. But a journey of thousand miles begins with one step, and we are beginning our battle with Deepalaya, Sanjay Colony.

Come, join us in the fight to save good schools like Deepalaya that serve the poor. Sign the petition to the Delhi government with the following demands:

The smiles which Deepalaya brought to the faces of poor children have been mercilessly wiped off. Let’s bring those smiles back. Save Deepalaya School!

Click here to watch a video on Deepalaya School, and how the people associated with it – students, parents and teachers – are affected by its closure.

Click on the images below to view them in high resolution. 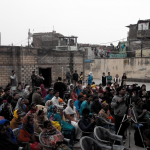 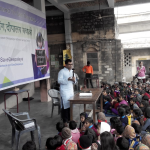